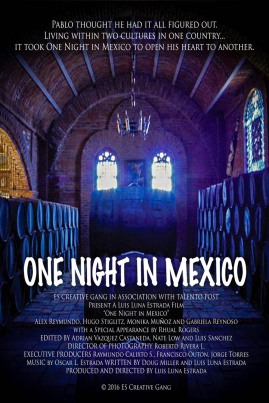 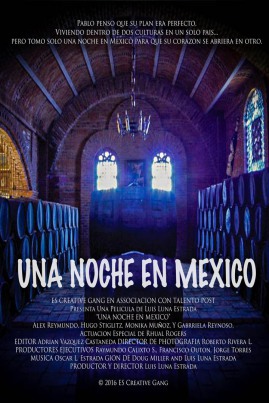 One Story, one Script, one Cast, two languages, same location.

A Love Story that Crosses Borders

Pablo is a first generation Mexican/American born in the United States, his parents gave him a great education and family life as they assimilated into the American lifestyle.

His parents planned on returning to Mexico to retire but after the death of Pablo’s mother  their dream of returning to their beloved country died with her.

Pablo’s father vowed to show Pablo the roots of his heritage and sends his son to Mexico to their family’s Tequila factory in hopes he will understand and appreciate his heritage.  Little did he know that “One Night in Mexico” would change his son’s life forever.

Starring Alex Reymundo, Monika Munoz and special appearances by Hugo Stigliz. "One Night In Mexico" will change your perspective across the border.

Shot entirely on location in the state of Guanajuato Mexico, two versions were shot together, one in English and one in Spanish, the first time this has ever been attempted successfully.